YES IN THE PRESS

An archive of the stories, posts, videos, and podcasts that feature YES.

In his first presidential address, President Trump referenced human trafficking as a reason to increase border security via a southern border wall. This is YES’s response, which clarifies his remarks and puts them in the broader context of trafficking in America.

Board members Emma and Gwen were featured in the KBOO series Sex 4 Sale which discusses sex trafficking in Portland.
Episode #1: https://kboo.fm/media/61610-sex-4-sale-episode-1
​

​This month, YES board member Molly Kelleher was featured on KATU News’ segment, “Kids Doing a Good Stuff.” Molly did an amazing job, and spoke about what it means for YES to be a youth-led nonprofit. She also promoted the upcoming Walk to End Slavery. Great job, Molly! Watch the interview here.

YES on the Air with XRAY In The Morning 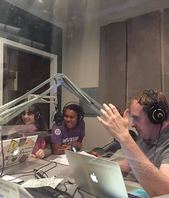 Board members Molly Kelleher and Angela Sivers had the opportunity to speak on the radio show XRAY In The Morning this past month. They educated listeners about YES as an organization and about the topic of modern-day slavery, as well as its prevalence in our world. Molly and Angela clearly embodied the core values of YES and demonstrated the power of the youth voice as they advocated for change. Click here to listen to their interview!

Sex Trafficking: You Can Make a Difference

"Never assume that a conversation you start, action you take, or role you have doesn't make a difference. It does." YES was featured in Lake Oswego High School's Consent Culture Zine! Click here to learn how you can deter sex trafficking and to check out the awesome content from other student contributors.

At the Intersectionality Workshop hosted by the Lincoln High School YES Chapter, members Molly Kelleher and Emma Christensen were interviewed by local activist, Adrienne Livingston. In this video, Molly and Emma share why political advocacy is pivotal to the fight against human trafficking. Watch the full clip here.

The Wholistic Peace Institute and the Harold & Arlene Schnitzer CARE Foundation are pleased to announce the 2015 Student Peace Leaders & Schools. Youth Ending Slavery was recognized among ten other schools with a $500 grant to support current peace work and initiatives hosted and facilitated by the organization. Schools from across the Oregon applied for this award and YES is incredibly honored to have been chosen as a recipient. Read the full press release.

Interested in the Walk to End Slavery and its origins? Read this article written by Youth Ending Slavery's Outreach Director, Katy Foley, and published by the anti-trafficking organization, Abolition Now.

Catherine Mattecheck, former board member and KBOO radio host, interviewed current board member Avital Balwit regarding the state of sex trafficking in Portland and the work that YES engages in to combat the atrocity. Listen here and jump to the eighteenth minute to hear Avital.

YES Board members were interviewed by Rollyn Betts on the Hebrew Nation Morning Show located in Salem, OR. You can listen to this podcast of the full interview to hear more of the conversation.

Two Board Directors, Allison Nasson and Catherine Mattecheck, were interviewed on Bread and Roses; giving insight and facts about modern day slavery both globally and locally. Visit the official podcast link here.